Many SEOs have made the claim that long content ranks better, but…

Is this yet another example of confusing correlation vs causation?

Or… will publishing longer content really help you rank better?

As one of the best SEO software for small business, CanIRank is in a unique position to understand why sites rank where they do. Thus, in line with our preference for data-driven SEO, this article is going to dig deeper into the question of content length vs. rank to determine whether this recommendation is actually supported by data.

The question of whether longer content ranks better is one that has been asked many times. If long content does indeed rank better, then writing posts that target tougher keywords, regardless of their keyword difficulty score, may be viable.

On the other hand, if you can get away with shorter content, why not? Anyone involved in SEO for startups or small business understands the challenge of working on a tight budget. Money saved on content creation can be used elsewhere for SEO.

Before we lend our voice to the debate, let’s review some of the more prominent studies on this issue.

In 2016, Brian Dean conducted a study on “which factors correlate with first-page search engine rankings.” Content length was one of the characteristics examined in his research and he concluded that “longer content tends to rank higher in Google’s search results.”  Here’s the graph he used to support his conclusion. 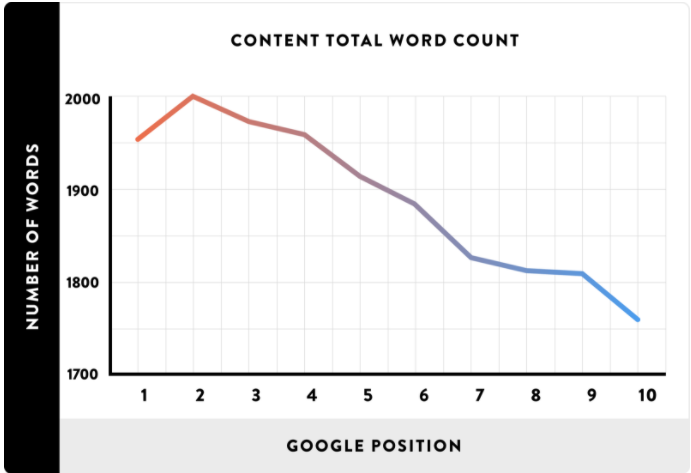 At first glance, this graph looks appealing. Except for the small bump in the number two position, everything goes downhill from here. Notice that this graph emphasizes how the word count drops along with the Google ranking. To an untrained eye, it’s very easy to jump to the conclusion that longer content ranks better.

Capsicum Mediaworks conducted their study four years earlier and came to essentially the same conclusion. “This does point to the trend that higher ranked sites have more content.”  The graph has a similar shape even though the absolute numbers differ. 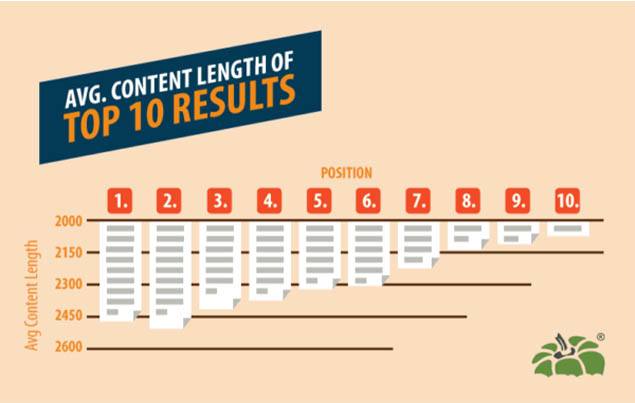 Again, the information seems to say: longer content ranks better. To their credit, they do point out that this graph is an aggregate of all the SERPs analyzed. Further on in the study, they conclude that “content length is just not playing a very significant factor in their ranking” for sites that are “well branded and have a lot of other signals going for them.”

Interestingly, a third study from CognitiveSEO came to a different conclusion. “At least for the first 5 rank positions, one could assume that, on average, shorter articles are better correlated with a higher rank.” Despite the effort put into conducting these three studies, we were still left wondering if there was something more behind this pattern. The conflicting results have left us no closer to really answering the key question: does longer content rank better? So we decided to dig deeper.

Our study is unique because rather than just looking for a correlation and drawing a conclusion from that one data point, we’re going to use CanIRank’s ability to show us why sites rank where they do and see if we can discover the underlying causal mechanism behind the correlation. This is more consistent with the scientific method, where one would never draw a conclusion without at least having a hypothesis about why a certain effect manifests.

While some studies have included up to a million URLs, what we’re doing differently is that we’re transparently communicating how robust different conclusions are.

Take a look at our graph of Content Length by Rank. For positions one to ten, it looks eerily similar to that of the Banklinko and SerpIQ studies. Although there is a correlation, let’s not jump to any conclusions. There are a couple of weaknesses we need to address first. Weakness #1: Is the effect really that large?

For the previous graph, we deliberately set the scale between 850 and 1150 on the Y-axis (content length) to create a particular emphasis. In fact, it’s the type of scale that you saw in those other studies.

Unfortunately, the arbitrary scales used by other studies can be very misleading. They make such effects appear more dramatic than they actually are.

Let’s take our same data and place it on a scale of 0 to 2500 for the Y axis (content length). This time we’ll look at Google rankings from 1 to 40 on the X-axis to see if we can find any demonstrable patterns.

Suddenly, the effect doesn’t appear to be that large. The slope is far less on this graph than the previous one. However, there’s another weakness we have yet to address.

Weakness #2: Does it only apply to the top 20 results?

Let’s return to using the same scale typically used by other studies so that we can exaggerate the effect once again. There’s a steep slope for position 1 through 20 but after that, it flattens out considerably. So the correlation between content length and rank isn’t as strong for positions above 20.

There Appears to Be A Small Effect, But Why?

So longer content is correlated with higher ranks, but…

Essentially, our question is: why does longer content rank better?

What comes to mind first is that people may be more inclined to link out to longer pieces of content. We can quickly verify this by comparing post length to MozRank as shown in the graph below.

Although MozRank incorporates many elements, for our purposes what’s most important is that higher MozRank translates into more links. So if longer content earns more links, we should see the blue line sloping upwards from left to right.

Keep in mind that the MozRank scale is logarithmic. So that MozRank 9 post is going to have significantly more links than one with a MozRank 2, around 782,000 versus 2.

So we don’t see any relationship between the number of links or MozRank and content length.

Another way to determine if content length drives links is to redo the previous chart while controlling for links. We do this by plotting rank versus the number of words for each URL with the same MozRank. The graph below shows the results for MozRank 3 through 5.

If higher ranking sites have longer content only because it earns more links, we wouldn’t see a correlation. But in fact, we do. Notice the visible downward slope for each line. Longer content ranks better even after controlling for authority. So it seems unlikely that this correlation exists only because longer content gets more links. But before we can conclude that content length itself drives higher rankings, we need to consider other possible mechanisms. While Big Brand sites publish slightly longer content than medium-sized sites, the articles are not as long as those on smaller sites. So, this could account for some of the effect.

We might expect content from specialist expert sites to naturally be longer. After all, it is written by an expert.

If I’m a photography nut and my entire website is only about photography, I will have a very high Website Relevancy score for “Canon EOS 1D review.” Since I’m a specialist, I’d probably go into a lot more depth (longer content) than a review in a non-specialist website such as the Wall Street Journal. To validate this fourth hypothesis we compare four different optimization factors against word length; page relevancy, topical relevancy, percentage of multiple keywords, and percentage of partial or no keywords. Looking at Page Relevancy and keyword usage, there appears to be a clear pattern only for very long or very short content.  A more clear relationship emerges for Topical Relevancy (use of related terms).

So it does seem that longer content is better optimized, especially if you consider topical rather than keyword-specific optimization to be the most important, as we do here at CanIRank. Intuitively, it’s easier to cover a topic more comprehensively with longer content. Optimization certainly seems to account for some of the effect we see here.

Although there are other possible causes for the correlation between content length and ranking; such as higher engagement/time on site due to longer content, that’s something that we’re not able to explore with public data.

Even when controlling for other factors, longer content still appears to rank higher. At least some of this effect is likely due to second-order effects like better optimization (in particular Topical Relevancy), longer time on site, and stronger brand signals.

However, none of the observable mechanisms were strong enough to account completely for the positive ranking benefits of longer content. We conclude that it is, therefore, plausible (though unproven) that Google rewards longer content directly in their algorithm, though the effect is quite small.

Regardless of your content length, be sure to nail topical relevancy, since that appears to be a significant part of the effect others have attributed to longer content.

Rather than a blanket “longer is always better” approach, use longer content strategically to overcome weaknesses. If you’re weaker in other areas than the competition, and a competitive analysis reveals that Google seems to favor longer content for your target keyword, go for it! It’s a tactic the best eCommerce SEO experts employ and it’s useful regardless of your market.

This approach makes a lot of sense when you consider the unexplored relationship between content length and user engagement. If I’m researching an academic topic, a 5,000-word treatise is a welcome find and I’ll definitely spend more time on site. But if my search was to find the best taqueria on the way to Yosemite, that same 5,000-word treatise is likely to result in a rapid lunge for the “Back” button.

As always, the bottom line is that different strategies work well for different keywords, so you owe it to yourself to research the most impactful ranking factors specifically for the keywords you’re interested in, rather than put too much weight on generalized third-party studies.